I have a problem with secrets.

Everyone looking for happiness and success is secret-obsessed:

“What’s the secret to happiness? “

“The top 3 secrets of high-performing executives.”

Our search for undercover keys to happiness is silly for at least 3 reasons:

First, it’s needlessly conspiratorial. It assumes that the profession comprises those “in the know” and the clueless remainder. I’m skeptical that top leaders are meeting in closed rooms guardedly exchanging simple solutions.

Second, it’s exploitative. I once met a traveling shaman who told the Kalahari Bushmen that the secret to attaining wealth was to remove the hexes that their enemies had placed upon them (and that he would gladly do so for a modest fee). Secrets-seekers are shaman-seekers.

Third and most importantly, it trivialises the obvious. Those lessons that we refuse to learn because they’re too boring, too unexceptional and too well-known. They would make a dud TED talk, the world’s most unimpressive self-help book, and when business leaders repeat them ad nauseum, they don’t make the back cover.

This September, I’m ignoring secrets and advocating the obvious. I’ve been asking people: 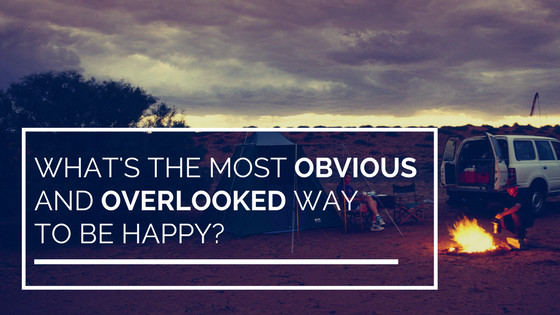 These are the three best responses I’ve heard so far:

1 Don’t just follow the cash Michael Bromley cites a great study on why. You’ve probably read exactly zero papers on climate change, but believe it’s real and important. But if someone writes a paper practically titled Lawyers, cash isn’t everything, well… they must be an idiot. Give yourself permission to believe it’s true.

2 Pick positive, joyful ways to react A middle-aged lawyer with a drinking or drug problem is a tragedy, but also clichéd. Most young lawyers have experienced celebrating victory with one mid-week drink and commiserating failure with three or four. Pick exercise, sports, reading, or cooking instead and make those reactions habitual. Make them joyful, not angry. Some perfectionists will run 20km to punishthemselves. Be moderate and positive.

3 Say no to bad deals There is a misperception that all commercial lawyers are working on the same terms. Not all lawyers are equal. YOU make the deal. When you take extended leave to look after mum and dad, the terms change. When your boss says you can spend Fridays working in a refugee legal clinic, the terms change. When you agree to forego the next 10 consecutive weekends and work 16 hours a day, the terms change. No one deal is better than others. Never criticise young lawyers for enjoying working hard and challenging themselves. But when the deal stops working for YOU, just say no.

What do you think? Are there any lessons in happiness that are so obvious they’re often overlooked? Get in touch or comment below.