There’s no doubt we’ve come a long way. Some of us have walked this road for decades and the results speak for themselves. We’ve taken so many great steps towards a world where homophobia, biphobia and transphobia are closer than ever to being what they should be – ugly, boring and out of date.

And it’s easy to think that progress was inevitable, but to those who know this path well, progress was anything but. There were many forks in the road where we could have chosen a different path. The easy option. The tone-it-down option. The don’t-get-political option. The wrong option.

You understood that last year’s vote wasn’t inevitable. Every Australian was presented with their own fork in the road, and in a country that usually votes to keep things the same, they voted to make a change. Why? Because you chose to have that conversation with them about what their choice meant to you. They chose – we chose – the rainbow road.

Now, a lot of people are asking what next for the LGBTI community – and rightly so! For some people, the way forward looks a bit like a honeymoon, for others, it’s more like retirement and others still describe it as everyone getting back to work. The truth is it’s none of those things.

Now in front of us, is another momentous fork in the road. We are now at a critical juncture. We are about to make a very important choice that will define our community’s character and we can never go back.

Because right now, we are living through two-speed diversity and inclusion. I’ve had LGBTI mentees at Out for Australia who are flying. Secured great jobs. Grown enormously over a few months with just a bit more confidence and support. Their sexuality, once a burden, is now a great strength.

And I have mentees that are in the trenches still fighting. Who have nowhere to live. Who still fear their own family’s retribution. Nothing is inevitable for them. I have one mentee that, the only thing he considers inevitable is that one day he’ll have to move back home and marry a lesbian friend because he’s so scared his entire family will lock him out of their lives if they know who he really is.

It’s conversations like this that remind us that we’ve come so far, but not with everyone. Every year, we welcome thousands of students to our schools and universities of every background. And with this new explosion of diversity and inclusion, Brisbane could be the oasis city for every student in every single way. We provide great education, clean air, the best parks, forests and beaches in the world and now we also offer the freedom to say what you want, do what you want and love who you want. 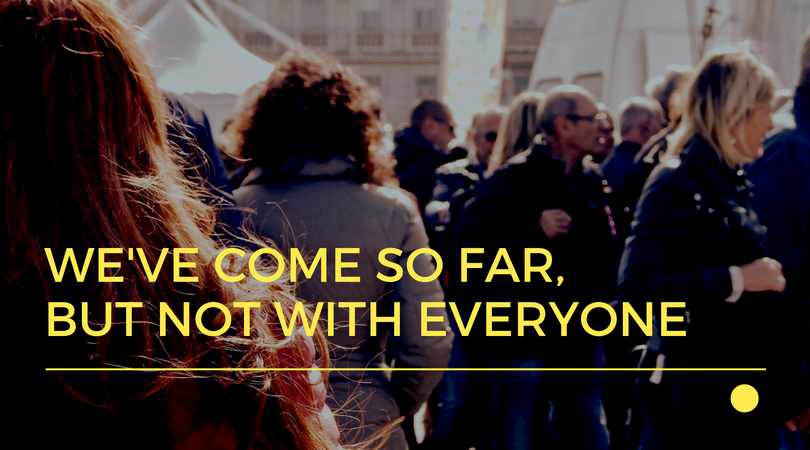 But at the same time, I have conversations with senior leaders that are starting to get diversity and inclusion fatigue. Frankly, they’re ready to pack up shop, call it a day and clock up a victory. And if we really are done, I have to go back to the most vulnerable people in our community and say “this is it. We’ve tried, but nobody has any more to give. If you’re not feeling safe now, deal with it because no one else is coming for you.”

Our response to those people can’t be that we’ve already had the party. We’ve won the battle. We fixed those problems last year. Everyone accepts you already.

Because all of us know what it’s like to pray for help that never arrives. I had so many conversations with people about how they would feel marriage equality didn’t pass. If we didn’t win. Well for some people, people in the real world, we never did.

Which brings us to our community’s critical juncture. The fork in the road:

One path takes us to the winners’ lounge. The country club where they’re serving French martinis by the pool and basking the warmth of tolerance and acceptance. And if that’s the path we choose, we really are done because there’s nothing left to achieve. Nobody owes us anything.

The other path is back into the trenches. It’s long, overtime shifts of empathy and compassion. It’s helping people with big, ugly, expensive problems that we didn’t even know exist. It’s going back for the people we forgot – the trans folk, the intersex folk, the folks returning to countries where who they are is not only illegal, but getting more and more illegal every day. There will be no awards, no prizes and no parties. It can’t be solved over lattes at brunch and it can’t be done quickly and it can’t be done easily. But make no mistake, it can be done.

And you should follow the example of the people who did some real heavy lifting – our allies. I’ve thought about the words “ally” and “alliance” and I think not really apt to capture who these people are. An alliance is a relationship of mutual benefit and common purpose. It’s you scratch my back, I’ll scratch yours. You stop rockets flying into our country, and we’ll go to war for yours. At its core, an alliance is about reciprocity. And what we have seen from our supporters over the last few years is far more admirable than an alliance. It’s not about reciprocity. It’s selfless giving. It’s empathy. It’s compassion, no strings attached. It’s speaking up when you don’t have to. Because above all our allies passed the ultimate test of character, doing the right thing not to score favours in return, but because it’s the right thing to do.

Because it’s easy and natural to defend yourself (I’m in trouble. I feel threatened. I need help.) It’s harder to defend people you have no responsibility for defending (My neighbour is in trouble. My colleague feels threatened. My community needed help.)

So if you’re one of the millions of Australians in our LGBTI community wondering what to do next, here are three things that you can start with straight away:

First: everyone has someone in their office that gave a damn about you, even when they didn’t have to. They helped make you feel safe and comfortable when nobody expected them to. So today, don’t just celebrate your own bravery and resilience. Go to that person and tell them what a lasting impact their actions had you’re your working life.

Second: don’t let anyone tell you that your sex, gender or sexuality doesn’t matter, because it does matter. It’s why our mentors are so good and doing what they do. Because you have an in-built, hardwired empathy for those toughest problems facing our LGBTI community. Your story is your qualifications, your credentials to help someone in need. You know what it’s like to pray for help that never arrived, but you also know what it feels like when help arrived just in time.

Third: Let’s all think about next year. In about 12 months’ time, you will get an invitation to come to an event like this and celebrate another year of this LGBTI network. By that time, you’ll already know what path we’ve chosen. You’ll pick up your name tag, walk through these doors and think one of two things:

What are we still doing here

My god what an incredible year it’s been.